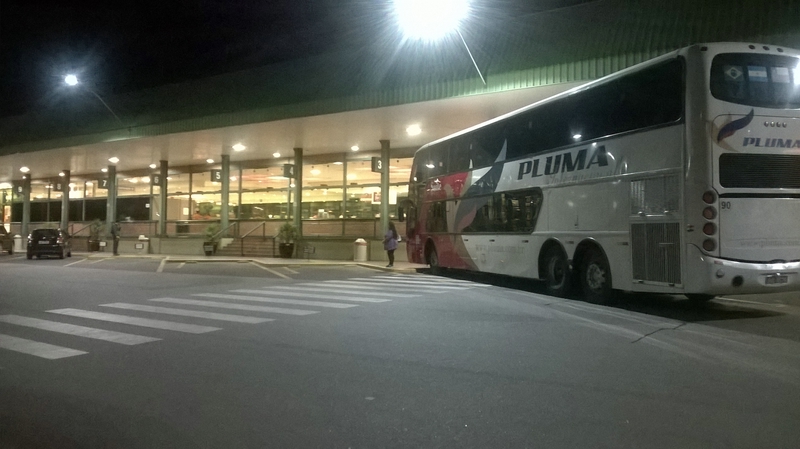 For all those who do not live in Latin America but want to visit one of the largest waterfalls in the world Iguazu (eng. Iguacu), you must decide how best to reach them. About the falls and how to reach them, as written in our other article, so we will not repeat. In this article I want to share experiences on the road by bus company Pluma from bus terminal Rodoviario Tiete in Sao Paulo to the Iguazu waterfalls, and specifically the city of Foz do Iguacu. In previous articles, I also wrote about how the airport can be reached from São Paulo to the bus station and about which tickets and in what directions can be bought at the ticket office of the Tietê bus terminal.
I had to go to the city of Foz do Iguacu. Before this city go buses only company Pluma. Her I took. Night bus ticket, which will be sent to 18:30 and goes all night, I railed at 198. So look their buses.

This price is very cheap, because the type of location or class is called a Semi-Cama. The width of the seats here are standard and seat do not unfold completely. All the seats in this class are on the second floor of the bus. The seats are laid out still decently, and enough space in the front and there is a mild footrest. So personally I was quite comfortable and managed to get some sleep.

Chair of another class Cama/Sleeper are located on the ground floor. They are wider and almost completely broken down, like a bed. In this class also issued blankets.

From Sao Paulo to Foz do Iguaçu, about 1000 km. We rode 2:00 pm. For all time, the bus makes two stops. First stop our bus did after about 2.5 hours, over 200 kilometers. Time to stop just over 30 minutes. Most likely, your bus will stop at the same place next to Shell filling.

On the right side of the building there are free toilets. On the left is the entrance to the Cafe shop. The system here is such that when entering the Café, you will be given a card. Further, as the buffet you choose food. Hot food in bulk worth 6 real per 100 grams. Further you can take drinks, various snack on the road and stuff. On the way to the Kassam, you scan the card from each output, if something out there take and in the end the box office pay directly for everything you ate and took with them. You can take nothing and at the checkout simply return the card, without paying anything. This shop-Café, but the prices are a little inflated, so if you are planning a budget trip, then about food can be taken care of in advance. There is also a free water in the bus.

On this stop, I immediately asked the driver to open my luggage to get warm jacket. Be ready, that due to the air conditioner in the bus is pretty cool. All night after that stop I already fast asleep. Early in the morning at dawn has already opened this landscape outside the window of the bus.

The second stop of the bus makes is almost at the end of the path through the 10:00 after the first one. We arrived to it exactly at 7 am.

The stop took 40 minutes. And although after each stop, the driver checks and recalculates the people, still it is better to have an idea of how much time it takes. They told me 30 minutes, but in fact both times they were longer.

Although the distance to Iguacu already small remains here there were many areas where roads are repaired, so we went much slower. Repair of roads here looks quite unusual. Of asphalt just cut out piece. Sometimes these pieces are very large and deep.

On again the road through the countryside. Here is the first time I met shaped trees, which, as it turns out, can often be found in Brazil and Argentina.

The next stop is already the ultimate in Foz do Iguacu. We arrived at around 10:30. Time from Sao Paulo is no different.

Iguacu falls in Brazil or the side of Iguacu prettier

Itaipu, the largest hydroelectric power plant in Brazil in Foz do Iguacu

dissertation thesis writing
2022-02-10 22:02:48
<strong>writing your dissertation in a week https://buydissertationhelp.com/</strong>