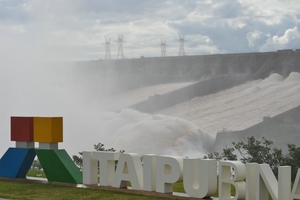 The Brazilian city of Foz do Iguacu, on the border with Paraguay and Argentina, attracts many tourists look at the famous Iguazu falls (eng. Iguasu), which are among the largest in the world and in scale surpass even the Niagara falls. But Iguacu is not the only place in town that is worth a look. On the North of the city of Foz do Iguaçu, about 12 kilometres from the Centre, is the largest Brazilian hydroelectric Itaipu (eng. Itaipi), which supplies electricity to the largest cities of the country-Rio de Janeiro and Sao Paulo, as well as the country of Paraguay. Interestingly, the city of Foz do Iguacu receives no electricity from this station. All electricity directly in capital for 1000 kilometers. Itaipu is a joint project of the two countries, Brazil and Paraguay. The dam has a gigantic sizes-8 kilometers in length and 60 meters in height. Reservoir size is 1350 square kilometers.

How to get to Itaipu

To get to Itaipu on their own must first walk or drive to the bus terminal Terminal de Transporte Urbano Pedro Antonio de Nadai», which is located next to Bosque Guarani Zoologico de, practically in the center of the city. From there, public bus 101 North. On any public bus service within the city, to March 2016 years, 3.20 ticket cost Real Madrid. If you came to the Terminal on foot, and arrived on another bus, then replanting inside the Terminal, pay for travel in the following bus no longer needs it. Go about 25-30 minutes. Bus stop near the entrance to Itaipu, but be careful, as this is not the last stop.

Coming from the bus, go to the right side, where the cashier’s Office. Entrance tickets for March 2016 year cost 31 Real Madrid. Current prices, as well as all additional information can be found on the official website www.turismoitaipu.com.br
After you purchase your ticket, you will be invited to first watch a short film. Then all sit down in the sightseeing bus, which covers the whole territory of that huge hydroelectric plants and makes stops so tourists can take photographs and grab a bite to eat.
The scale of this building impresses with its size. It’s not just a hydroelectric power plant. It is a small city within a city with its roads and infrastructure. On the territory of Itaipu is even university students. So if you happened to be in Foz do Iguacu, do not miss the opportunity to see and this attraction, which not everybody knows.

You can watch a short video filmed during the panoramic tour of Itaipu.

Iguacu falls in Brazil or the side of Iguacu prettier

From Sao Paulo to the Iguazu waterfalls on the bus

how long is a doctoral dissertation
2022-02-11 19:10:13
<strong>it dissertation help https://dissertationwriting-service.com/</strong>