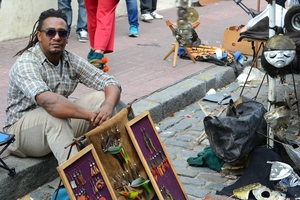 In this article I would like to share with you my impressions of the outing on one of the tourist streets of Buenos Aires-Defensa street. I accidently got on this street in Sunday and walked through it no less than three hours. This happened not because she is so long, and because the selection of souvenirs, the number of counters, and most importantly, creative approach and handmade souvenirs, make this place a very colorful and appealing, so I want to look at much of what there selling and taking pictures. But we need to be careful, because you can still reacting and spend a bunch of money, but buy a lot of things that are just collecting dust on the shelves. Here it is better to arrive at the weekend. The easiest way to reach the street, you can catch both metro lines Defensa reaching the station Plaza de Mayo.

I found myself on the street after 2 weeks of my stay in Argentina, that is not quite right. During this time I had a little bit to get used to the local colour, but somehow finding myself here, I made everything seem particularly picturesque. It all started with this dog))

Then, a little after going forward, there are various nooks and crannies. Some of them look very fotogenično.

And then the endless stalls with various souvenirs for every taste. I’ll start with the most common. The most popular and possibly useful souvenir is calabash (Special mug for drinking mate tea made from a gourd, wood or metal). Here can be found in virtually every counter and each mantanasa (Esp. mantanas-so the Argentines called the people that sell various goods on blankets or Plaid, as a blanket in Spanish is a manta). Passing on the street and not buy yourself a calabash and bombil′û (Special tube with strainer for easy drinking mate), if you do not already have it, it is virtually impossible. They are presented here for all tastes.

Of the many proposals kalabasov, most profitable and interesting to me seemed sets that include the calabash, trimmed with decorated skin, bombil′û (tube) and a small package with a mate. It’s all beautifully packaged in a box.

The second most common souvenirs here, I’d call photos and various paintings. Some of them are very bright and beautiful. Especially here, it all looks very colorful. I want to pick up with you!

Among all these bright paintings, my attention for some reason most drew this stand.

This guy’s name is Diego. He is a photographer and most of his black and white photos made in the abstract style. As he told me, he hails from Colombia-a very bright country, located on the Caribbean Peninsula. But went thence four years ago and travels through Latin America, photographing and selling your photos. On their pictures it shows details that, in his opinion, the atmosphere of life in South America. Black and white color he chose as though because colors contain a lot of information and divert attention. Photographers were not allowed to photograph their work, so I made only a single shot, but his work can be found on the page diegomoreno-fotografiaytextos.blogspot.com. I particularly liked the picture of the boy, looking at the sea, in which he combined both color and black and white tones. Yet in order to print, or to shoot in black and white, we need some kind of will that would abandon the beauty of all the colors in the photo. Personally me after talking with him, just wanted to set the camera in monochrome, but I only have enough for a couple of shots. This is not my first try, but I was always haunted by the feeling that I have a lot to lose, photographing in black and white.

In addition to photographs, paintings, drawings, and mugs for mate here still selling lots of different things and souvenirs. Many of them are handmade and look really unique.

From eating here basically sell pies, hot dogs and fried nuts (they can often be found in Argentina).

In addition to the goods themselves unique handmade, and there are also many artistic people. Some of them play the guitar with a special charm, others show the puppet theater, which also makes sense and its charisma. Along the street there are scenes featuring local soloists and groups.

Perhaps, then, one of the most unique characters seemed to me this man. Nothing special, just something raised tie, and images look very funny))

Well, in conclusion I would like to add that the appearance and the people themselves are sometimes very harmonizes with a local touch.

In addition to all photos, suggest also watch our video about this place in Buenos Aires. Also read our other articles about Argentina at this link.

Buenos Aires district of Palermo. Attractions of the region and the city

What to see in Cuba or back in the USSR